A moment of quiet

Last night, on my way to soccer, I got to appreciate a moment of quiet. I was able to enjoy the beautiful sunset. I enjoyed my iced coffee. I appreciated the warm evening air. I was able to take a deep breath. Sometimes, despite the craziness in my day to day, I have moments like this.... and I appreciate every second of them. 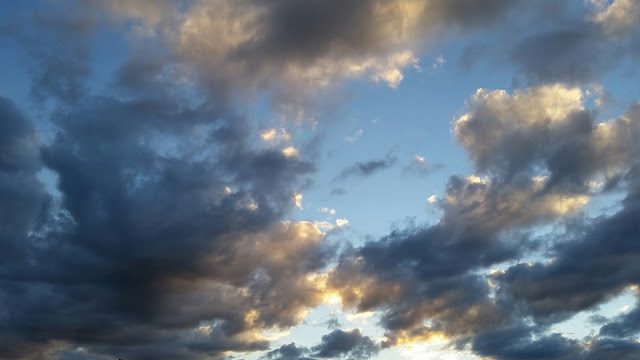 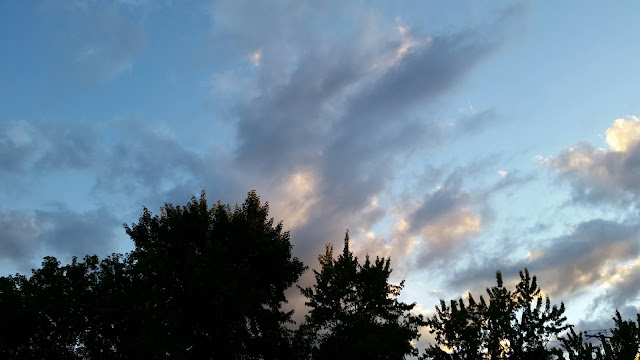 When I lived in Denmark, I had a great Everton retro shopping bike. Unfortunately, European brand bikes are were not well known here and, mechanically, hard to maintain. So, my lovely bike stood in our garage, making strange noises and unable to change gears properly. Boo!

The other day, I was listening to a radio call in show where the topic was cycling in Montreal. Firstly, over the past 10 years, Montreal has gone from a very bike-unfriendly city to a happening bike place. Downtown is filled with cycling culture and many Montrealers proudly cycle year-round... even in -40C and snow (this will be another blog topic sometime). Anyway, the radio show inspired me and I did some bike-repair-research. All this to say that I found Allo Vélo.... my poor bike's saviour! They not only sell Danish/Dutch style bikes.... they fix them.... at a good price.... and have coffee.... ALL AT THE SAME SHOP! ;) Heaven! The guy didn't even looked perplexed when he took a look at my bike! All he said was- cool- and told me that he would call me back when my bike was fixed!

Love this place! Just so happy at the chance of getting my bike back that I wanted to write about it. No commercial exchange took place... just loving a cool Montreal shop!

I have been eyeing a certain skirt on ASOS for about 3 weeks now but don't really have the money to buy it. So, while trying to be responsible and well-behaved in internet shopping land, this skirt has been calling my name....  It is now out of stock so it is also now out of mind ;) Bye-bye, temptation! ;)

Yesterday, I booked my first "after summer holiday" meetings at work. You mean that the holidays are done already?  Where did the holidays go? Why am I still tired? I had this LONG list of things to do this summer and most items have not been crossed out yet. I am still running around non stop to the summer activities (pool.. home... pool.... home.... pool.... home.... soccer, soccer, soccer.... swim meet... soccer.... repeat) and now I have work too? I have to wear real, non pool clothes again?AND shoes? You mean that a towel around your neck is not an appropriate fashion accessory? EEK! I am not ready yet ;)

Wishing you all a happy slowed-down Wednesday xox 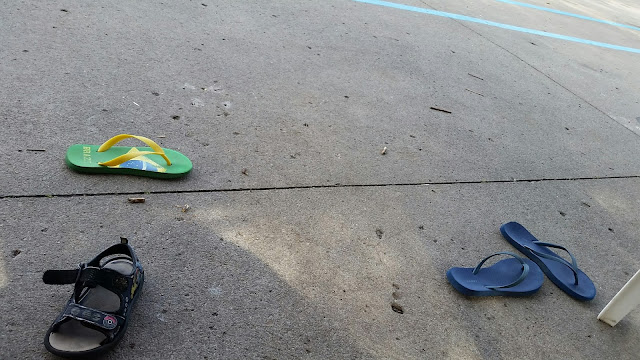 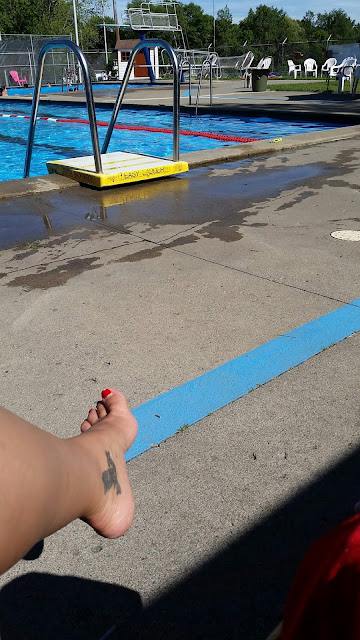 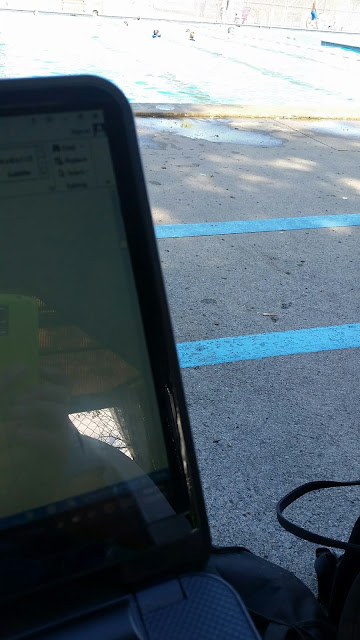 On Friday, the contractor came back to do some last minute touches (ok... there are STILL some last minute touches but- heck- good enough!) so the job is now more-or-less done! I know that we were VERY lucky (I know of horror renovation stories) but, still, I am super glad to have our home back and very happy with the "new" house. I kept waiting to take pictures because....who knows? Maybe my home will suddenly look like a designer show case... but.... nope. Haha! I gave up on that concept and took a few pictures anyway. It doesn't get any better than this... despite my best efforts ;) Kids were in the house already and not part of the renovation ;)

Hope you are all having a great day xox

Heard in the car today

For some reason, I was happy to let Andreas be the focus of his affections today ;)

Over the past few years, we had an infestation of some kind of plant that just spread like wildfire in our garden. Andreas and I tried to get rid of it, over and over, and- finally- it seemed like we managed to clear it. This summer, we decided not to plant a lot of fancy flowers because we weren't sure if pain-in-the-bum-plant would come back so I threw on a pack of surprise mix wildflowers ($7.99 at Walmart). While we were in PEI, they started to bloom and I couldn't be happier! Awesome colours, no care required and butterfly-magnets.... <3 Maybe I will do this every year!

Happy Friday to you all! xox 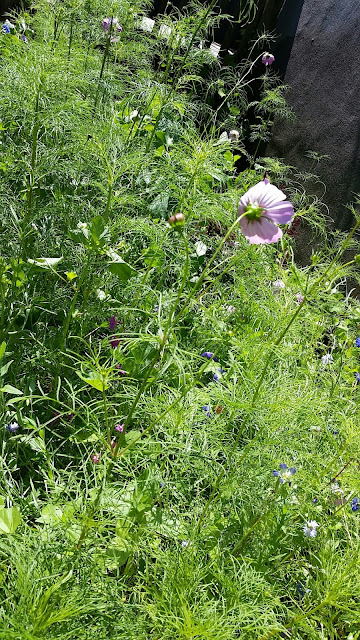 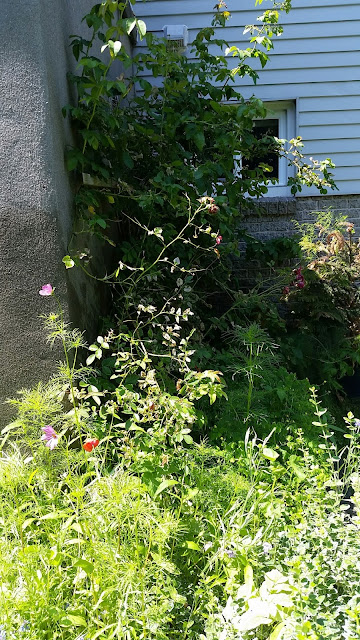 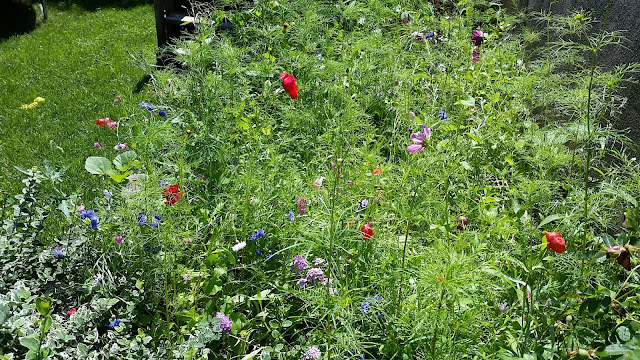 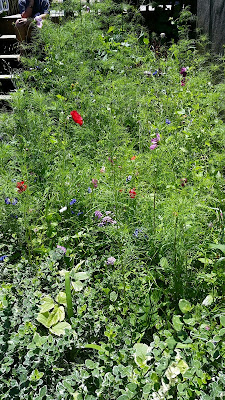 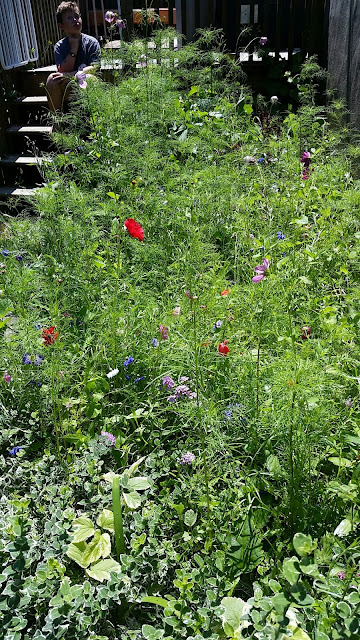 When we were in PEI (on Basin Head), a teenage boy found a bunch of hermit crabs in the water. He gave them to Oliver, who decided that he was going to be the world expert on hermit crabs. When it came time to leave the beach, I told Oliver to put his crabs back into the ocean. OMG! I was totally the worst mother in the universe. In a moment of total weakness, I promised to get him a hermit crab when we got home. Stupid me! I honestly thought that he would forget... move on.... but, no. I heard from the resident hermit crab expert every day until I finally caved... and brought home.... 3 hermit crabs. Oliver is so excited that he spent 10 minutes watching his crab and is now eating left over pizza... @@ (that is my eyeroll). Names to be released at a later date ;)

Welcome to our new friends ;)

Alexander has been playing Pokemon Go for 2 days now (this is day 3) and these have been my observations so far:

- This is the most he has exercised all summer long. He is on his bike/walking NON STOP. This aspect of the game is pretty cool. Problem is that some people actually drive around, using the app. This is not so cool.

- The app actually got Alexander to want to go to the library (it is a Pokemon stop or something like that). I reminded him that books were there too. He looked at me and rolled his eyes ;)

- ADULTS are using it and randomly hanging out in odd places (ie: outside our City Hall). At first, it made me laugh. Then it started to creep me out. Seriously. Yesterday evening, I agreed to take Alexander to the City Hall Pokemon spot. Nicka came too because he wanted to see what it was all about. There were at least 20 people hanging out in front of the building. I think that Alexander and Nicka were among the youngest there. Like I said: creepy.

- While we were at City Hall, I started to tease Alexander so I loudly called him a gamer. About half of the Poke-heads turned and looked at me. Hahaha!

- On our way home, some girl noticed that Alexander was playing. She raised her fist in the air and called out "Pokemon"! Umm.... sure. Whatever....

- I have come to the conclusion that I am not cool and, you know what, I don't care ;)

We had a fantastic trip! Even thought I am sorry that it ended, there is something for sleeping in one's own bed :)

I think that the last 45 minutes in the car were the hardest for the boys. Alexander just found out that Pokemon Go was finally released in Canada (for "not cool" people like me, see the description HERE) and he was literally panicking in the backseat ;) Nicka and Oliver had run out of movie patience and video game batteries by this point and just looking out the window was NOT an option (I tried that one) ;) Anyway, we were happy to be home... with such good holiday memories.

Happy Monday to all! I will be spending the day cleaning, doing laundry and easing back into home life xox

Today, after leaving PEI, we went to see Hopewell Rocks in New Brunswick. It is a part of the Bay of Fundy where, twice a day, 100 billion tons (yes, billion) of water moves in and out. Absolutely impressive (see video after pictures). It was definitely worth a stop!

Tonight, we are staying in Fredericton, NB and will head back home early tomorrow. Montreal, here we come!

Wishing you all a good evening! 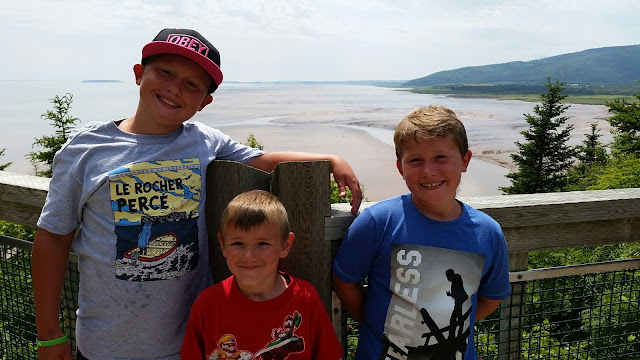 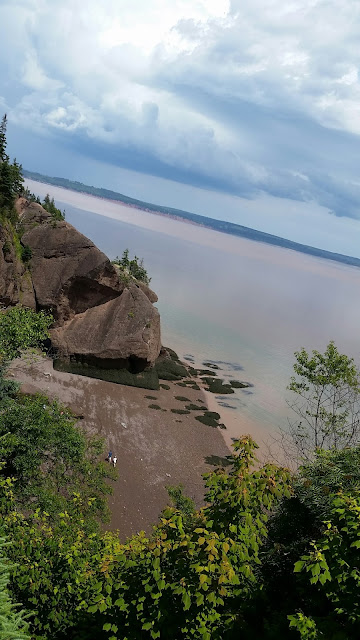 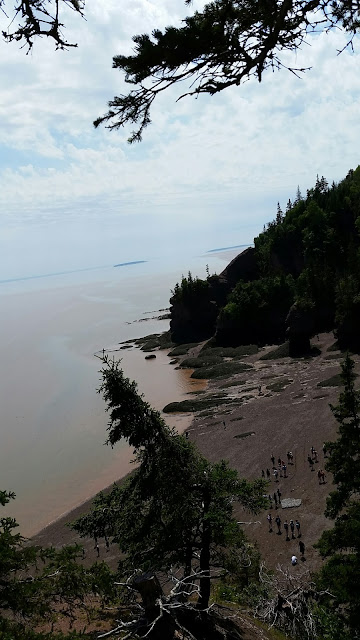 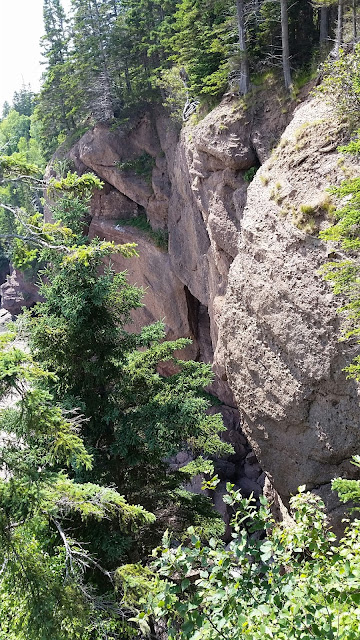 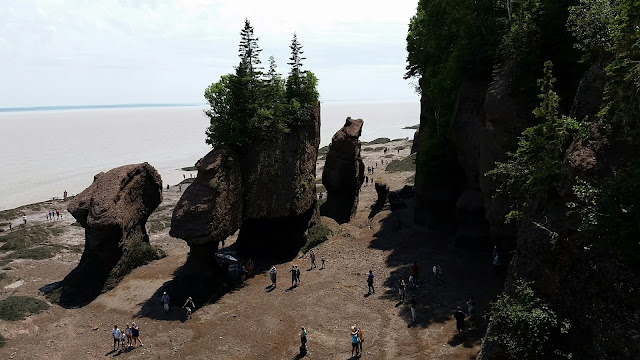 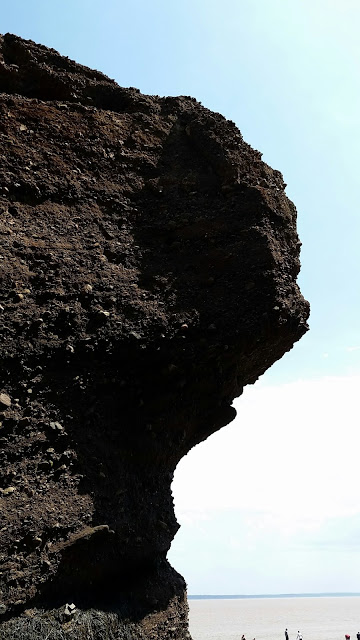 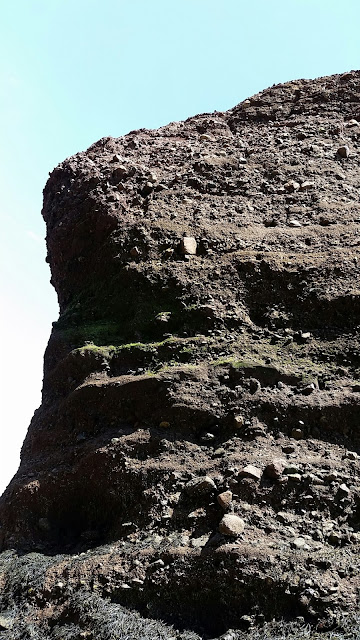 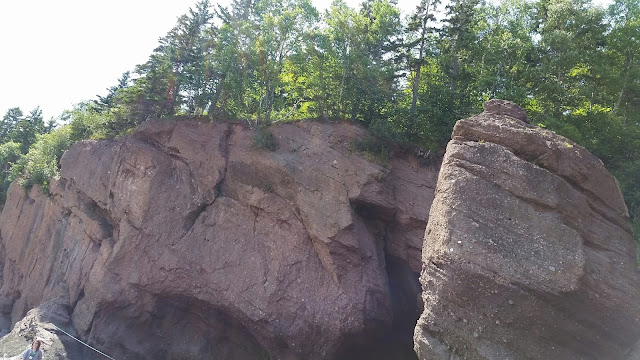 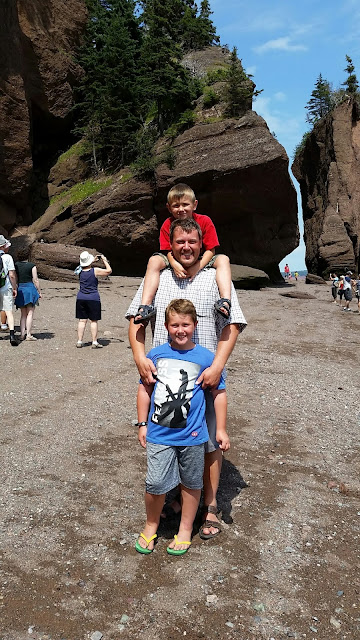 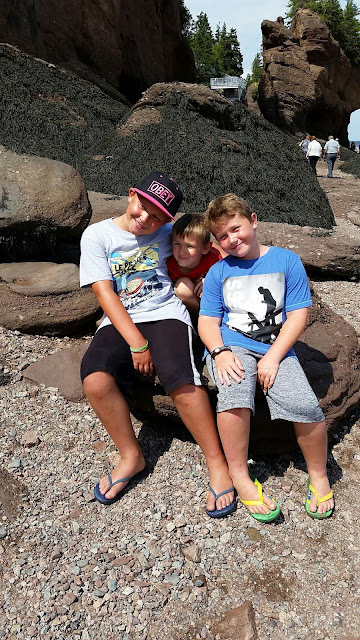 We are leaving first thing tomorrow morning so I thought that I would send you all some postcards from Prince Edward Island...

See you tomorrow in Fredericton, NB.....