Why I have grey hair, part 2: homework

The boys spend way more energy AVOIDING their homework than actually DOING it. In turn, I spend WAY more energy nagging them to do it than it is actually worth ;) When they eventually sit down and start working, they get mad at me. Like it is my fault they have homework. Only MY students can get mad at me... I deserve that ;) If they are not silently simmering, then they like to fool around. Homework is only fun when you can piss your brother off in the process ;) I am either the nag... or the ref ;)

Wishing you all a happy Monday xox

Why I have grey hair- part 1: my husband

This past Saturday, I had to work. So- what does any normal OCD mother do when she is away and the house is full of boys? She texts them from work. Honestly, I should know better....

Wishing you all a great day! xox

This morning, I woke up to snow falling from the sky and a blanket of white covering EVERYTHING.... BOOO! Despite my initial tendency to go back to bed, I got up and have been miserable ever since ;) Actually, the coffee helped ;) To further torture myself, I cleaned off both of our cars and made sure that our ice scrapers were in the trunks. Thankfully, I came out of denial long enough last week to make sure that our cars had their snow tire appointments at the mechanic. 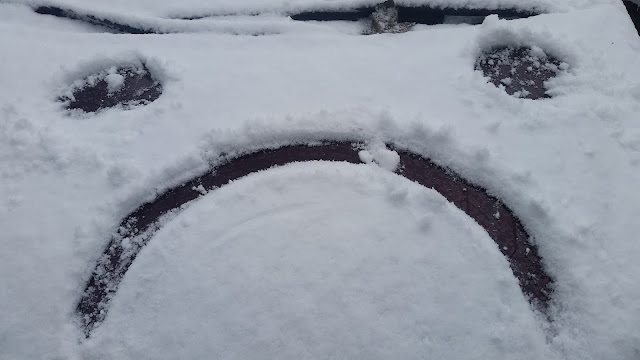 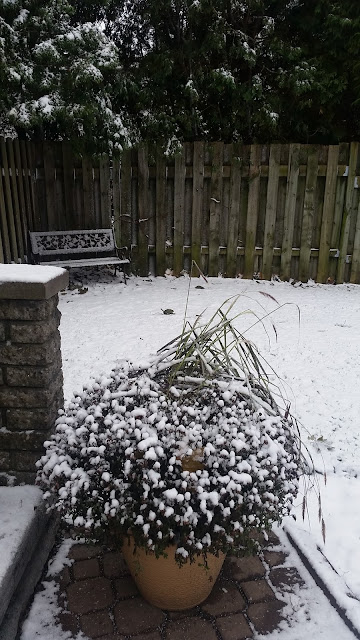 Both yesterday and today were long days at work. We had a conference, where I had to present. Now I am back home and enjoying some relaxing time before the rush of putting the boys to bed. I am tempted to make some tea... but way too lazy to get up ;)

Boy, I remember when Saturday nights meant being out late. Now, I will be surprised if I make it until 8:00 ;)

Whatever you are doing, I wish you a good one! xox 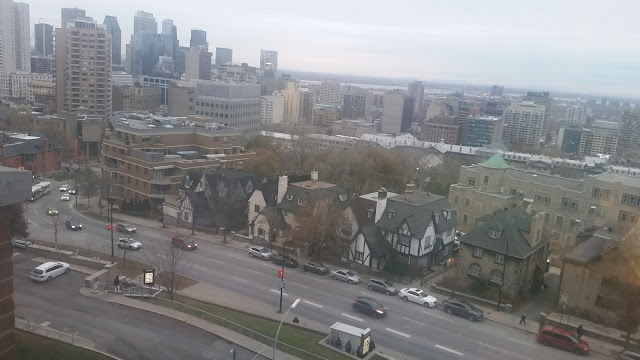 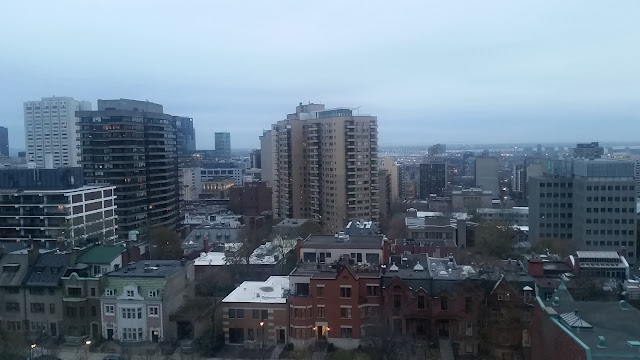 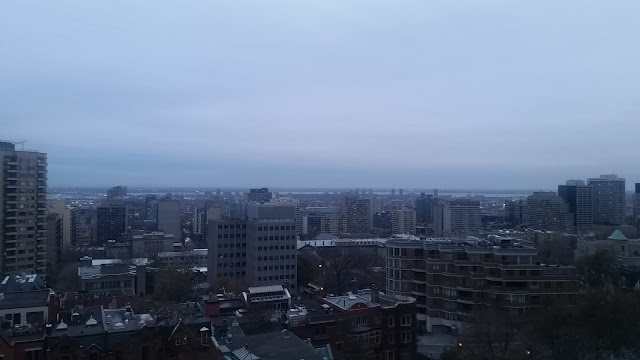 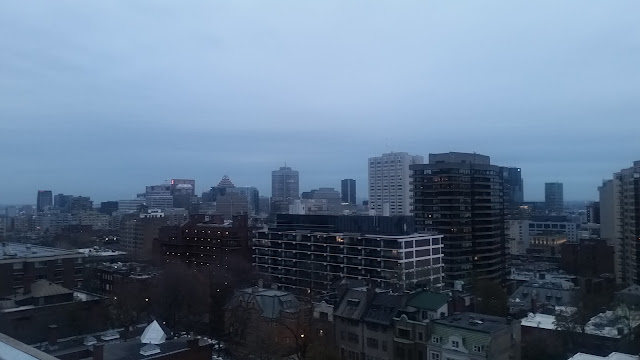 Since it is after midnight, I can officially say that we have a teenager in the house. Alexander, born on November 13, is now 13. Although I have absolutely no idea where time went, I do know that we are very proud of the young man that he is becoming.... even though he sneaks his phone to bed to watch Youtube videos or play football games and needs to clean up his room ;)

We love you, baby boy... and I will always call you that even if you are definitely no longer a baby.... xox 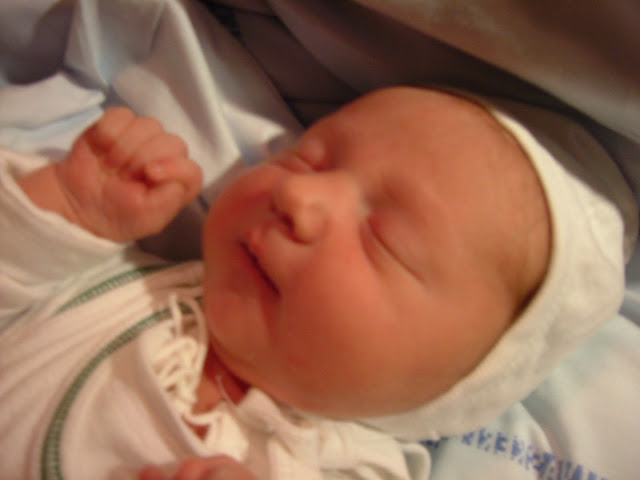 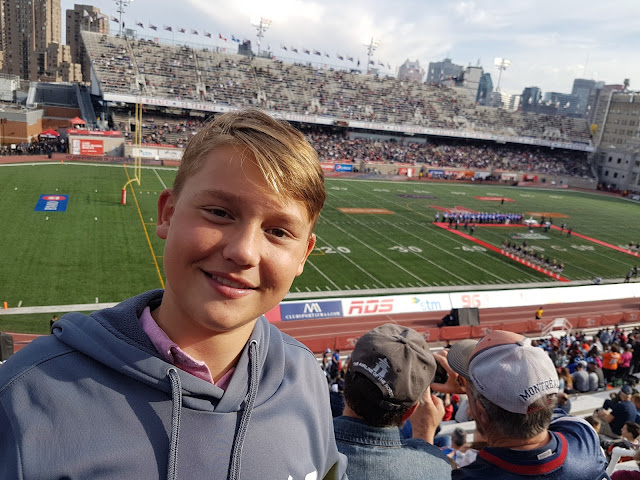 If you are from Montreal, then I am saying the obvious: we are a hockey city. Yes, even my very "soccer" family still watches hockey (you can love to play one sport but still appreciate the others, no?)... When I was in my early 20's and living downtown, one of our favourite pass times was to watch the first period of hockey on TV and then make our way to the Montreal Forum (yes- I just totally dated myself ;) but if you are not familiar with it, here is a link. It has since been replaced by the Bell Centre but is still in the hearts of Montrealers) to buy very cheap tickets off the scalpers to watch the rest of the game live. My apartment was only blocks away from the Forum so it was a perfect plan :)

Like I said, we still watch hockey (admittedly, on my part, not so much when the Canadiens are losing) but the boys in my family have never seen a game live. So, this week, when I was given some awesome tickets by an awesome person, I thought it would be a good way for Andreas to take Alexander out for his first "real" hockey game. Alexander will be turning 13 on Monday so it was perfect timing... kind of a Montreal-version of a right of passage ;)

Anyway, last night, the boys (Andreas and Alexander) went and had a great time. Their seats were so close that you could actually see the game (one of the last games I went to see, we were so far up that I started to get altitude sickness ;) ) and enjoy the atmosphere. A great boys' night out!

Photo credits go to Andreas because I wasn't there ;)

Wishing you all a very happy Friday xox 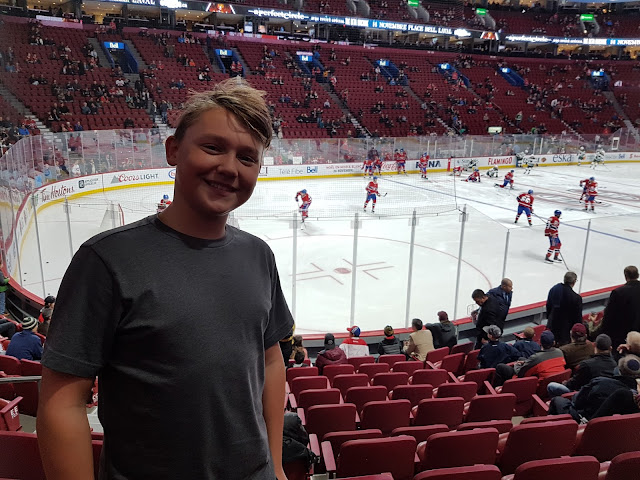 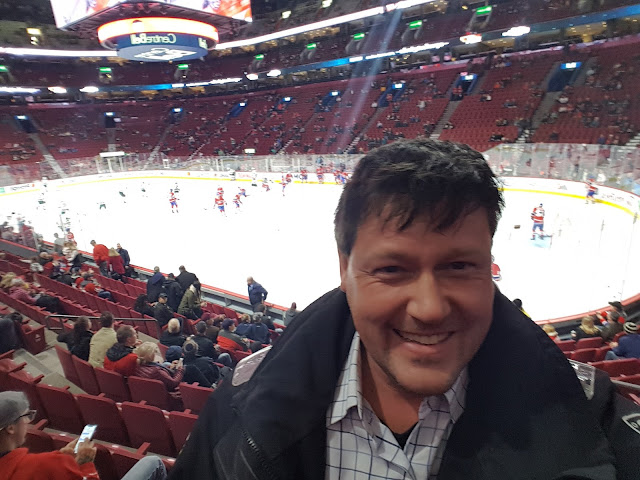 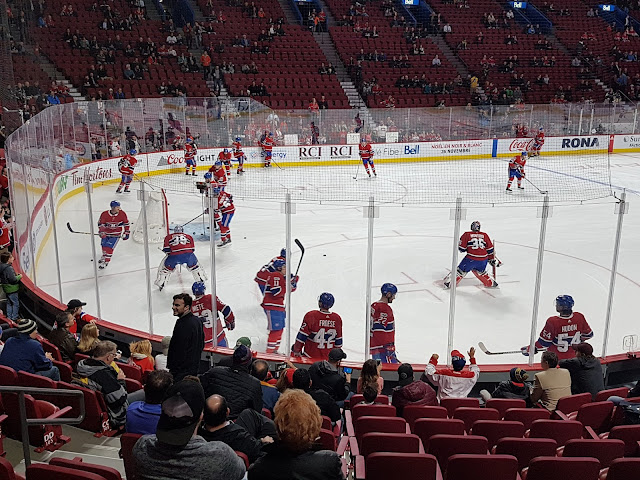 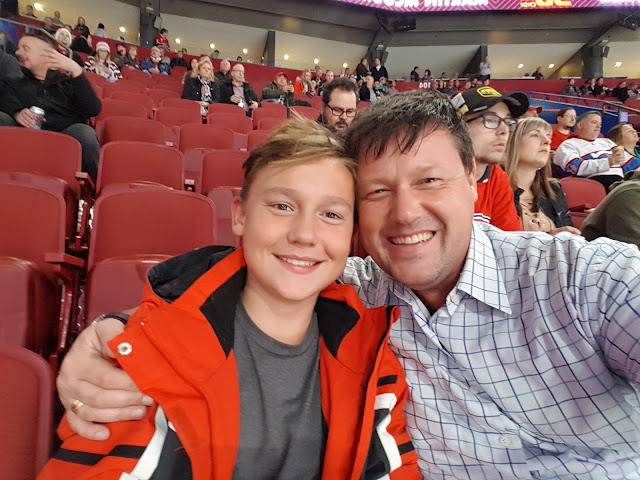 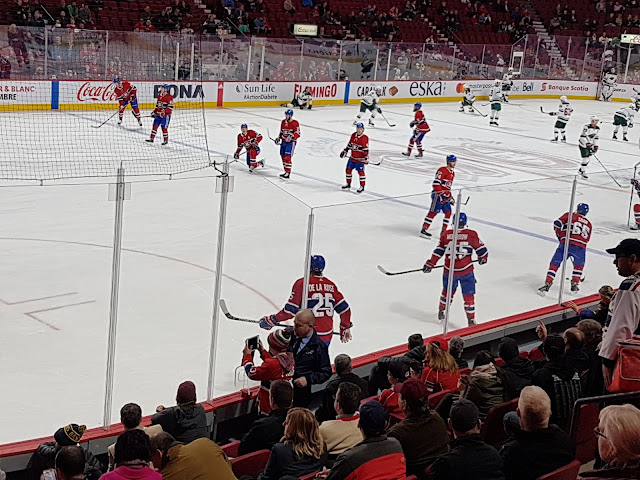 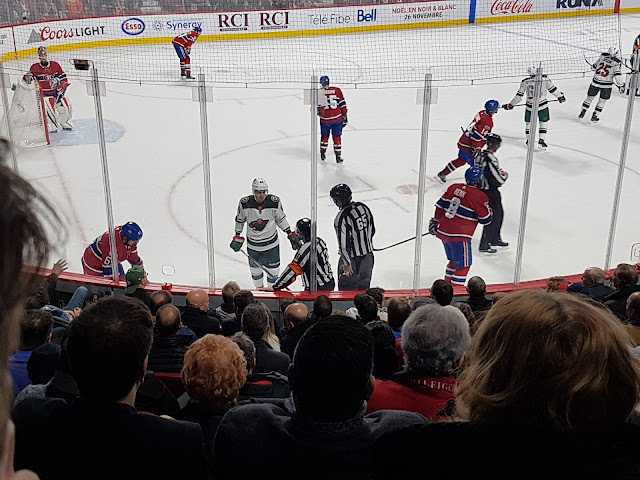 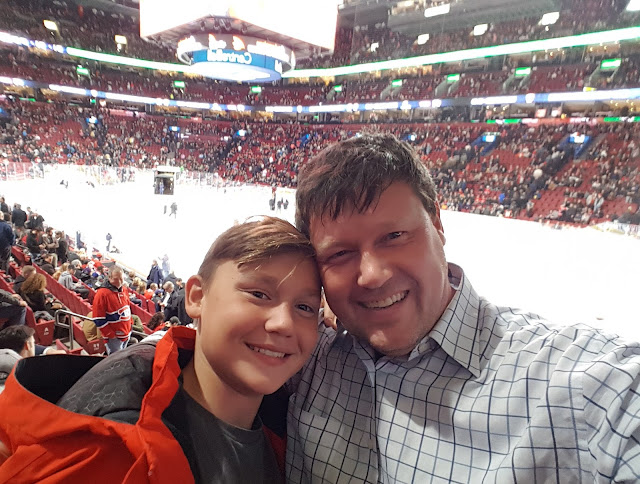 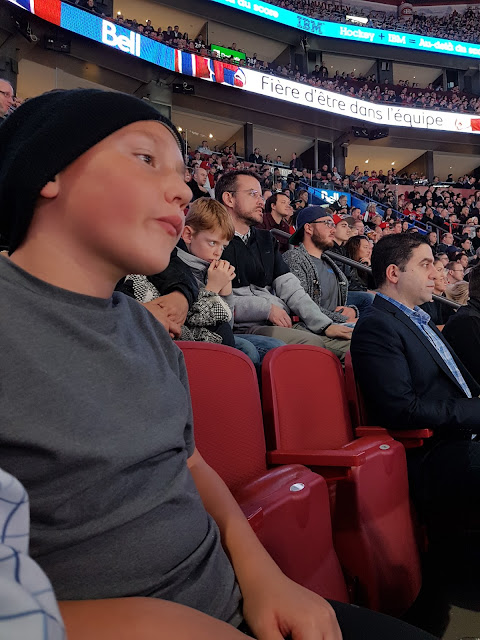 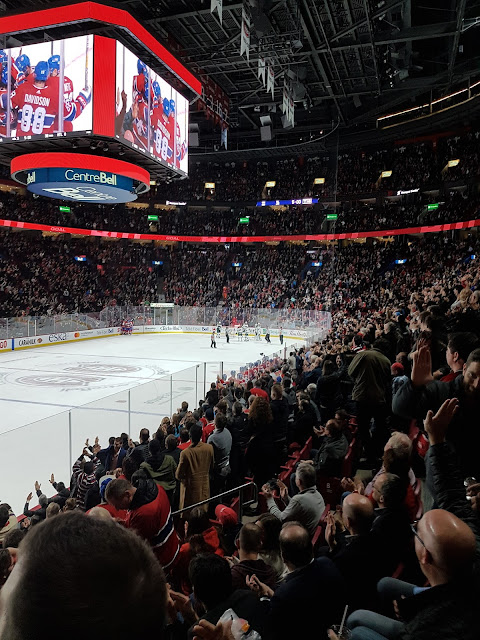 Turning back the clocks

Yesterday, between the time I left work and the time I got to the train station, it got dark. Not the late afternoon sun like I got used to during my post-work walk but a real night time dark. During my train ride home, it got even darker... and darker. Honestly, by the time I got off the train, I could have sworn it was at least 10 pm. From one week to the next, not only did we set the clock back an hour but it also feels like we lost another 5!!!
Winter time... here we come ;)

A friend of mine posted this image on Facebook. It was exactly how I felt yesterday so I had to steal it ;) By the way, I got home at 6:15 ;)

Wishing you all a happy darkness ;) xox 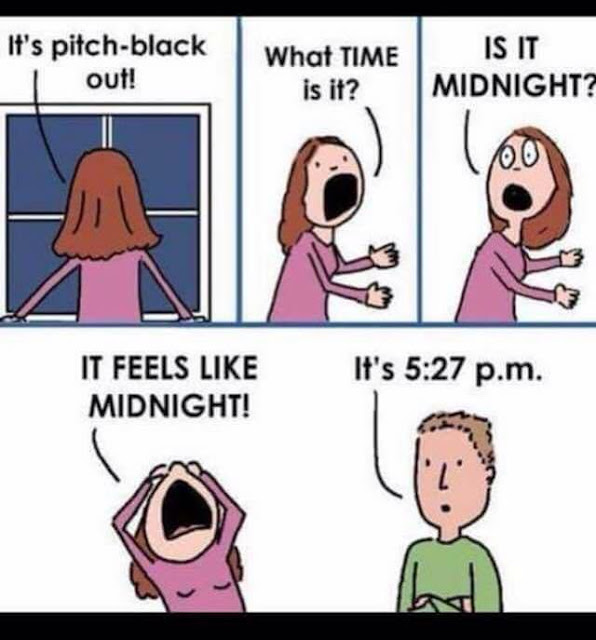 Posted by Celena at 1:45 PM No comments:

Signs of things ahead

Last night/this morning, we moved the clocks back one hour. The appointment with the mechanic to put our winter tires on has been booked. I made a big pot of pumpkin soup. My mother put her Christmas tree up (seriously- she is worse than the stores... and I know that she will read this ;) ). It is now dark at dinner time... and I am starting to feel the need to hibernate. I actually bought some Christmas gifts. Although it is still green out, I can feel winter sneaking up on us. Beware... weather complaining ahead.

Hope you all had a great weekend xox 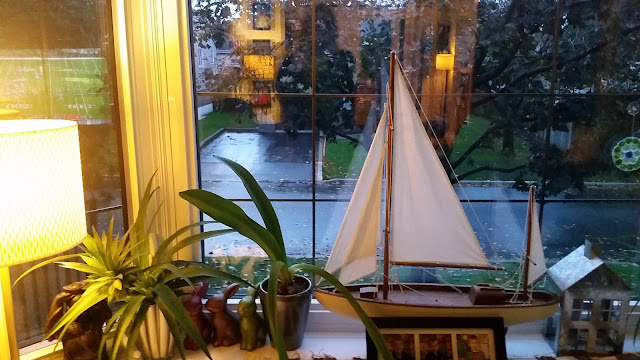 Posted by Celena at 4:53 PM No comments: